Create a catalogue in InDesign from XML

Why read this article?

Setting up the InDesign template is an one-off job, with one sample product entry. You write the XML transformation code once. Then, when you import the data, the single-book template replicates itself to create as many catalogue entries as there are product records in your data — potentially thousands and thousands of catalogue entries with a single click. Then reuse your template and code for the next season’s catalogue.

ONIX is a way of sending rich book data to the companies who need it – Nielsen, Bowker and so on. But ONIX’s comprehensive nature means that it can be quite verbose. In a catalogue, we don’t need every last bit of information about a product. So we’re going to convert our ONIX XML message into another XML file that’s less wordy, using a language called XSLT. Then we’ll be able to import it into InDesign. (In fact, InDesign can handle the conversion process itself, when we import the XML.)

Get the backlist demo files

Download the files here [zip file, 15mb]. This zip file contains an InDesign template for many products per page, and some sample data.

Get the frontlist demo files

There’s a further set of demo files for a frontlist catalogue containing one product per page, which take a similar approach, described here:

Regardless of whether you’re trying out the frontlist or the backlist demo, the following notes describing the backlist files should help.

Here’s the structure pane of our backlist InDesign template, showing how each entry will be structured: we’re going to need to whittle our ONIX down until we’ve got an XML file that matches this structure. 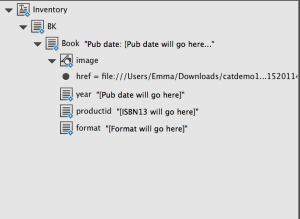 To prepare the data for it, using an XSL transformation:

Line 1 tells the computer that this is an XML file.

and gives a bit more information about this part of the file – which is that this code is XSL.

Line 3 means “find each mention of ONIXMessage/Product in the ONIX file.”

The next bit defines a new XML tag, called

If you look ahead to line 24, you’ll see its sister, the closing tag. We know it’s a closing tag because of the backslash.

Lines 5 to 7 set up some variables. A variable is like having a shortcut. For example, I can define a variable called “address”:

Now, next time I want to give my office location, I don’t have to spell out the whole address. The variable “address” is a shorthand way of saying the whole thing.

Back to our code. The next lines define three variables on the next lines: one called form, one called date and the other called isbn, so we can use them later. The values of the variables come from the ONIX file. The data tagged up with ProductFormDetail is assigned to the variable called “form”.

Similarly, the value in the ONIX tagged up as PublicationDate is saved as the variable date.

Lastly, the ONIX tagged ProductIdentifier[ProductIDType = ’03’]/IDValue gets set as the variable called isbn.

There are two ProductIdentifier tags here and this code selects the one with ProductIDType 03.

Line 8 defines another XML tag, called <image>. Because it’s an image tag, it takes an href attribute. It uses the isbn variable, defined above.

Converting data into a new format

The next line defines a new XML tag, <year>. It uses a new XSL command:

Line 9 says “Get the value of the date variable”. It also amends the date format.

What it’s doing is saying:

The next line, 10, is also an <xsl:value-of>, and we use our isbn variable again. This line produces another XML tag called <productid>.

All these tags will be used in the InDesign document we’ll see in a bit.

We’re going to look at the last XSL command for today, which is

The next bit is best shown on video. Watch how to use this XSLT code to transform ONIX into a more concise XML file and automatically flow it into our InDesign template. (Watch it on HD to see the detail.)

Use the files you’ve downloaded to practice, and then use your own company’s ONIX file to have a go. Then, tweak the InDesign template so that the colours and fonts are to your taste, and produce your own catalogue. Raise a ticket for more guidance.

I can recommend A Designer’s Guide to InDesign and XML even though it’s old (the technology hasn’t changed much in the last 15 years) which contains even more templates and excellent descriptions of how to start using InDesign programmatically.

All docs about Export